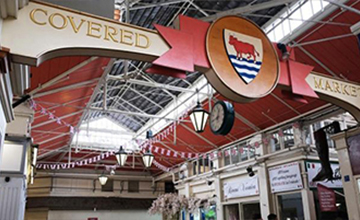 Oxford’s Covered Market came about as a result of the ‘Oxford Mileways Act’ of 1771 which was introduced to make the city’s main roads safer, provide more space for traffic, allow for the demolition of the old city gates, the widening of the narrow streets and the construction of new roads.

The old markets located in Butcher Row, Fish Street and St. Aldate’s, which had survived since medieval times, were considered to have become messy, untidy and unpleasant and these were condemned by the Oxford Mileways Act and promised to be relocated in the new Covered Market.

To establish the Oxford Mileways Act a joint committee of respected gentlemen, including city and university representatives was set up on 12th June 1771 and Mr William Elias Taunton was selected as Clerk of this Committee and paid a handsome salary of £10 per annum. Mr Taunton sat on the Committee for a period of almost 50 years and was knighted in 1814.

In 1814, ‘The Victory over Napolean’ was celebrated by a spectacular dinner, hosted for some of the most impressive Royal visitors ever seen in the city; these included; The Prince Regent accompanied by Alexander 1 of Russia, Prince Metternich, Frederick William 111 of Prussia, distinguished soldier and statesmen including Marshall Blucher.

This celebratory dinner was followed by dancing and music for over 4000 of the poorest people of Oxford and the following morning, a visit to the Town Hall took place where the town clerk W E Taunton and Major of Oxford, Joseph Lock were knighted and given the ‘Freedom of the City’.

As the Covered Market has been trading for over two centuries, it obviously has a rich and varied heritage and some businesses have stood the test of time and still operate under family names with their origins way back in history. Trades have changed over the centuries and now incorporate, cake shops, florists, jewellers and, of course, barbers.

Thanks to Heritage Lottery funding and courtesy of the Oxfordshire Archives and Newsquest Oxfordshire; there has been access to previously restricted historical documents and archives to enlighten us to the evolving personality of this wonderful market.