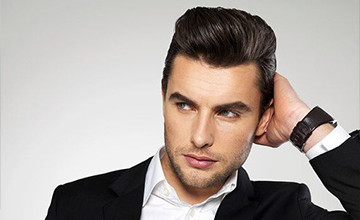 By admin
Comments Off on How Mens Hair Fashion Has Changed

How Mens Hair Fashion Has Changed

Years ago it used to be only women who changed their hairstyle, while men sported the short back & sides of the post war era. Some say that fashion goes in cycles, but if you look over the past decades, specific qualities that separate trends in hair fashion vary from decade to decade.

In the early 60’s young men began to rebel against the formal haircuts of their fathers and began to grow their hair, usually modelling themselves on their cult idols, such as The Beatles and as the next generation arrived, it became more focused on the ‘love & peace’ era of the hippies and numerous young men, in the 70’s, grew their hair to extreme lengths.

The 80’s saw the start of a new craze when ‘new wave’ bands such as ‘Wham’ emerged and subsequently big hair styles arrived, some with extreme quiffs and the possibility of a boost in sales of hair products designed to hold such styles in place.

In the 90’s mens hair fashion took another turn when the huge football players such as David Beckham spiked and highlighted his hair, the craze was copied by hundreds and hundreds of fans and now men and boys alike were attending their barbers requesting hair like Beckham.

In the 2000’s the fashion for mens hair became even more diverse, with patterns being shaved into haircuts, men having short cropped sides and long on top, more spikes and more highlights.

In this day and age, mens hairstyles consist of ever-changing fashion fads, with the younger generation wanting to style their hair like their pop, film, or TV favourites and mens hair fashion has gone from very limited options of the past to an abundance of styles to choose from. Men have also become accustomed to using numerous hair products to style, dye, highlight, perm or hold in place their chosen style.

Barbers today, unlike the past, are considered to be hair stylists qualified in the art of cutting, tinting, highlighting and fashion styling mens hair, but an added bonus is when your barber is also able to offer the good old fashioned traditional art of close wet shaving alongside the modern hairstyling in demand.