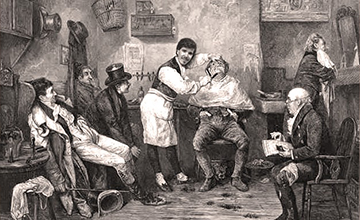 By admin
Comments Off on The History of Barbers – Part 2

The History of Barbers – Part 2

Part 2 of our interesting ‘History of Barbers’ blog, brought to you from Oxford’s leading Covered Market Barber.

By the turn of the 18th century, Barber shops had become extremely influential, in particular, in the developing African/American culture and they had become a haven for men to escape from nagging wives and every day cares, a place where they could participate in ego-boosting verbal contests and a refuge where the men only domain reigned supreme.

Early in the 19th century a new name for barbers came into use and this was ‘Chirotonsor’, Chiro meaning ‘hand’ and Tonsor meaning ‘shaver or shearer’; thankfully people preferred to call them Barbers, which is still in use up to this day. In 1893, a school for Barbers was established by A B Moler in Chicago, where students were taught to cut hair, shave and apply facial treatments, which proved to be extremely popular and its success resulted in further schools being opened in almost every city in the United States.

From 1920 onwards, the profession of Barber took a turn towards the more modern approach and huge efforts were made to professionalize the business as it was necessary to secure a good level of professional work, by means of licenses and an adequate training and education. An introduction to a more scientific approach with the assistance of biologists, chemistries, and anatomists saw the barbering profession takes a new approach in the early 20th century.

During the second half of the 20th century, fashion changed immensely and men began to wear their hair and sideburns long or to have perms and this disrupted the traditional male-only barbershops enough for them to reconsider their clientele and offer their services to both men and women. By the 1980’s several unisex barbershops had appeared on the high streets and during the 1990’s almost every salon (as they had now become known) provided services for both men and women, offering not only hair cutting and styling, but perms, colouring, bleaching, highlighting, and sometimes skin and nail care.

Fortunately, in the modern society of today, there are still a few traditional barbers’ shops around, which offer decent haircuts, men’s styling, and shaving and grooming services. Even in this age of unisex everything, some men still prefer to go to a traditional barbers, while some ladies prefer to go to a salon which caters for females only and these gender specific businesses will hopefully continue to thrive.

At Dukes barbers we are striving to achieve a bridge between the traditional style of barbers and the modern styling required by the men of today. All of our stylists are qualified in men’s grooming and hairdressing and our traditional classic wet shave has always been highly recommended by our customers.